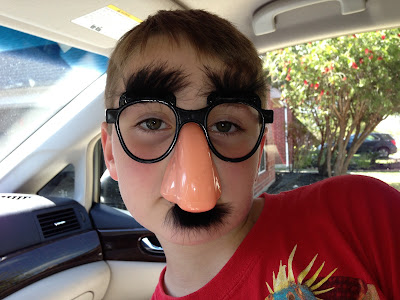 Yes, this was quite funny. I was not expecting this when I turned around to see what was taking him so long. He had taken his shoes off. He had dug stuff out of his backpack. He had removed his beany cap and removed his sweater. Really? It is a two mile drive home from the school.

The face that looked back at me when I turned around to look at him, however, was priceless. I bust out laughing. Oh so serious. Who could take that face serious? I love that the school allows the children to have some not so serious times.

Evidently this was their auction day. They have an auction at the end of the 9-week grading period and they use their “buffalo bucks” to purchase stuff. This was Lance’s purchase today. That and a couple of other things. This is so fitting for Lance. I am glad he got this.

With the struggle we have had this past 9-week grading period with his talking and his inability to “control” it, I am surprised that he had “any” buffalo bucks to spend at the “auction” to be real honest with you. Alas, he did pull it together and managed to collect some funds somehow. They get the bucks for doing a variety of different things, it is not 100% dependent upon their talking and/or behavior. Still this grading period has been a rough one for Lance between not turning in his homework and the talking. Finally we have reached a point where he gets in the car on Tuesday with his folder and opens it and looks at the “conduct” section and announces to me “I controlled my talking this week.” He managed to do that 3 weeks out of the 9-week grading period. Like I said, it was a rough 9 weeks for him.