What really got me is when I would go to wash a pan that I had cooked something that was clearly bad for me in it and I would run this sponge around in it and I would just look at it and think, “this clearly cannot be good for me.” I would actually shudder a little. I would see the pork fat on the sponge and I would cringe. That would not exactly come out. I would then wash my other dishes. How would that help me in the long term? Is this the reason that I am still having problems? Is this the reason that the problems are not getting better?

So when the youngest child was sent to fetch another sponge from the cleaning supply bucket in the garage and he came back declaring, “there are no more sponges,” I was done pondering the idea of getting another sponge and what to do with the whole “sponge issue.” I was considering even going so far as to have two sponges – one for them and one for me. That was crazy thinking in my head, how would we ever keep that straight. It would be pure frustration and end in me replacing a lot of needless sponges anyway.

I am doing good to get my kids to wash their hands between doing certain things. Yesterday, case in point, when I was teaching Andrew to do some cooking things. “Please use soap” I declared. “It might not be a big deal but for me it is. That is how you keep me healthy. So please wash the pork residue off your hands.”

It was a quick fix for the lack of sponge. I grabbed a small wash rag out of the pantry out of the dish towel pile on the shelf. It was not big deal to me. I had already considered going to dish rags instead of sponges so I figured then was as good of a time as any. There was some resistance on the part of my children and husband. It was different. It was not their normal and they were having a hard time adjusting.

I will confess, washing with a wash rag is not the same was washing with sponge that has a soft spongy side and a scrubby side. I was really missing my scrubby side for stuck on food and stuff.

I decided I wanted to try making some dish rags of my own. I had the ability. I could either knit them or crochet them. I did not care. I started searching online for patterns. I found a few. I finally settled on something that I modified in my head as a variation of a couple. I just kind of combined them.

This is what I came up with: 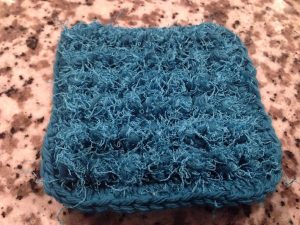 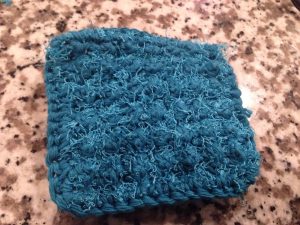 The back. The less scrubby side. The scrubby yarn is a bit more loopy than I expected. It tended to come through on both sides. Both sides are scrubby to some degree or another, just one side is more scrubby than the other. I actually like that. 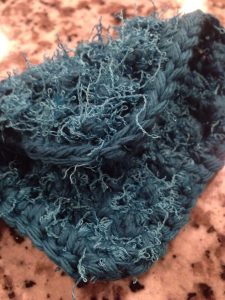 A look at both sides. You can see that one side is more scrubby than the other, but there is no huge visible difference in the two sides. I like it over all.
I have not used it yet. I will let you know how I like it after I have used it and washed it a few times. 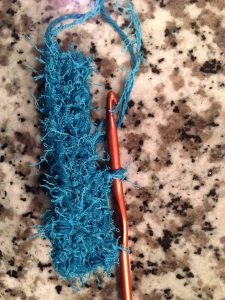 I have started another one where there is no difference between front and back. It was a lot of work to separate the front and back. This one is working up quick. I need quick as I am really missing my scrubby sponges. I want to be able to leave sponges behind when I leave for Utah on Saturday.

My next thought is whether or not I can do un-paper-towels. I am a bit more hesitant on that.