My mother handed me a surprise gift a few weeks ago. I did not think much about it at the time. She knew that I was making things in bulk and freezing them. These were things that might or might not be in liquid format – Cream of Chicken Soup and/or Chicken Broth.

I had figured out a way to get them into the quart sized bags without getting it all over the sealing strips and the sides – without making a mess. I had a method. It was not perfect, mind you. It worked most of the time. Except for those times when it did not. Those times it was messy. 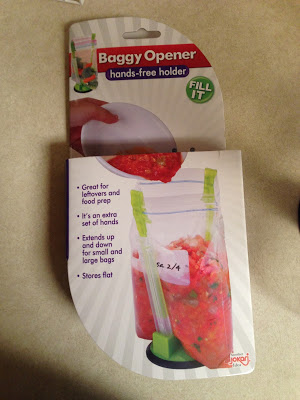 Evidently mom stumbled across these on one of her browsing…err….shopping trips on Amazon. It does not look like much in the packaging. The device is not in the package in the picture above. It folds completely flat, so there is not even much packaging to talk about. It is really about 1/2″ at most in the packaging. What you see is what you get.

The best part is that it holds up to a gallon sized bag. My previous method did not. I could do quart sized easily, but gallon sized bags was really pushing it. I was using large plastic drinking cups. I would stick the bag down inside the cup and then fold the top edge of the bag over the top of the cup. You can then scoop your stuff into the opening and it works. It works until the cup falls over. Then it is just a mess. 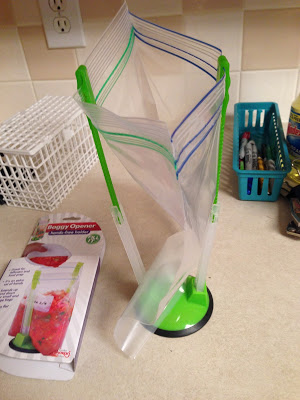 This kitchen gadget that my mother bought me, however, it holds up to a gallon sized bag. The little arms move up and down to accommodate any sized bag you have. It is awesome.

I will be completely honest with you, I did not think that it would hold a full bag of anything. It is just plastic. It is light weight plastic at that. It is not even a suction cup on the bottom. It does not stick to the counter top in anyway. It just acts with weight alone.

I pulled it out for the first time as we were preparing for the move. I needed to bag up some stuff in the pantry and put the canisters away in boxes. The packers/movers would not move food-stuff. I wanted to be able to give some of the open stuff away because it would be in storage for a little while otherwise. 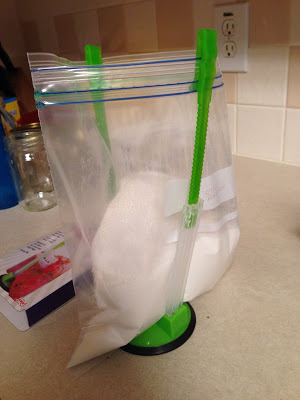 Dry ingredients were very quickly loaded into the bags without any stress at all. My bags were kept clean around the top so I just had to seal them shut. 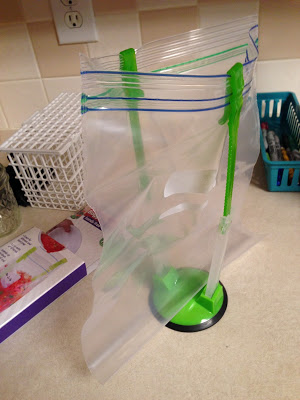 A little bit different angle of the device so you can see how the bag sits between the arms. As you can see the top of the arm has a fairly good grip of the bag. 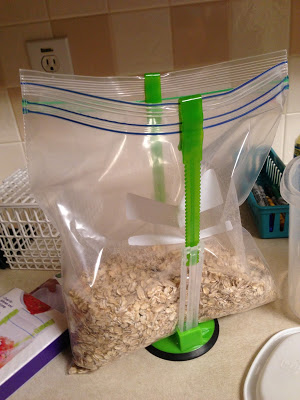 The weight of the oats easily distributed between the arms and spread into the bag.

I am sure that I am going to like this even more when I am using it more and more with other things that I make. I am grateful that mom thought to get me one.