Here in Texas, particularly in the Greater Metro-Houston Area, there is some discussion on where to get the best Chicken Fried Steak. There are a few places to go in the Far Northwest quadrant of town. There are several places that claim to have good Chicken Fried Steak. I have eaten at four of these places and I can tell you that I have narrowed it down to one that I favor as of right now. There are things that I like about another, but one place does stand out above the rest for me in spite of those things.

My sister, Jennifer, and I spent the morning in court again. She returned to deal with some old filings that had not be closed by her ex-husband. So even though there was a final hearing down and there were temporary orders in place that were established as a final ruling by the final hearing, there were still these open filings from 2011 that Judge York felt that it was time to deal with. Off to court she went. I was along to provide the ride and offer moral support. Nothing more really. Fortunately, the stuff was closed out and she was cleared to leave within 30 minutes of the docket start time.

So as to not waste the day out, we wandered off to eat. It was still early and frankly we were hungry. Really we were in the mood for some breakfast food, but that is not what we found. Why is it harder to find what you are looking for when you are actually driving around looking for it? Even using the wonderful map and searching features on the iPhone was not very helpful. We were in the mood for a nice breakfast–crepes, perhaps. By this time, I had driven a good part of the distance back home. Finally, we decided where we were going to go and try to find breakfast–Goodson’s Cafe in Tomball, Texas.

This is important because you need to refer back to the spill about the Chicken Fried Steak and how important it is to good Southern raised folk. Now my sister was born in the South, but unlike me, she only spent a few months in Mississippi. She got to the great state of Texas faster than I did. No surprise as seeing I am five years older than her.

Anyway, we figured that we would be able to get a good home cooked breakfast at Goodson’s. Waffles or pancakes and lots of other good tasting things that are probably not very good for you. That is besides the point.

That is not what we found on the menu we were handed, however. No breakfast foods found at all. I was really disappointed actually. Here I was all worked up and ready for a good hearty breakfast and I was not going to get it. What a let down! Never fear, Goodson’s Cafe touts that they are the “home of the best chicken fried steak in Texas.” I am not kidding, it says that right on their sign out front. It says it on their website. This is a “world famous” restaurant that was established back in 1950 according to the history on their website.

Now putting all that aside, I will admit to being glutenous from time to time. I confess that when I sit down to eat a Chicken Fried Steak, the last thing on my mind is how healthy it is. I could really care less. It is fried for crying out loud. I do not think that by definition and by name alone that it will be healthy. Oh and in Texas all things are bigger. Bigger sometimes is better. When it comes to Chicken Fried Steak, that sentiment holds true… 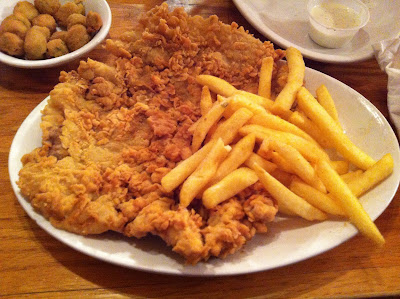 This is a Small Chicken Fried Steak. I have to say that they do vary in size a little bit from day to day or even plate to plate at the same time on the same day as was illustrated in the difference in size between my plate and my sister’s plate. They have awesome Fried Okra. I am not a huge okra fan, but if you fry it up I will chow down. Theirs is awesome and they serve it with Ranch Dressing which I had never had the combination before this place and I am hooked. Oh and so that we are clear, I normally get the mashed potatoes. I was not in the mashed potato kind of mood today. I had the Mashed Potatoes on Saturday night. Did I just confess to eating it twice within three days time? 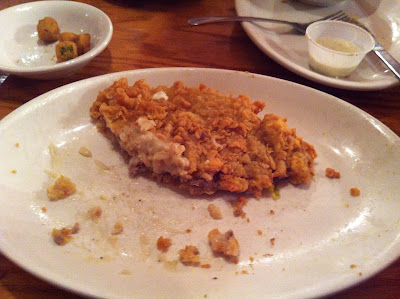 Just so we are clear, I might admit to glutenous ways from time to time, but that does not mean that I am gluten for punishment. I did not finish that Small Chicken Fried Steak. Not even close. There was a “doggy bag” to go with what was left (quite a bit) of the Chicken Fried Steak and the creamy gravy.

Even though I could not finish it, it was still a very good Chicken Fried Steak.