I do not like shopping for new products just because. I really do not like walking down the kitchen gadget aisle and browsing for any reason whatsoever, to be real honest with you. That is of course, unless I am looking for something specific. I do walk down the aisles from time to time when I know that I am going to be in need of particular items, but I cannot say that I frequent the aisles. I suppose that is why I was shocked by the items I found at Target on Monday.

One of the things that I have been looking for is new cooking spoons. Mine are in pretty bad shape. They are old so this should not come as any surprise. The plastic spoons are 12-18 years old at least. The age depends on when I got each individual one. Some of the ones I have in the kitchen are newer and those are not the problem. However, they older ones are starting to really show their age. They are starting to look melted on the end and other places (the handle in particular). They are stained. They are also showing some weakness–the handle is not rigid like it used to be, it has a fair amount of flex. The wooden spoons, while not quite as old, are worn and warped. Some of them are starting to crack. It is getting harder and harder to find a decent spoon to cook with in the kitchen. I have thrown several away over the past few weeks.

As a result of this, I have wandered down the aisles on the search for replacements. The problem is that I cannot find anything that I like or that I would pay the money they are asking for them. They are cheap looking, cheaply constructed, and are cheap or they are cheap looking, cheaply constructed, and not so cheap. I also do not want to spend a lot of money on them. There have been a few over the years that I have paid a fair amount of change for and I have been rather disappointed with them in the end.

So my sister, Jennifer, and I were wandering the aisles at Target on Monday afternoon after we ate lunch at Goodson’s Cafe and I saw some that were not the color I would normally buy, but they caught my eye. They looked well constructed. They were all one piece instead of a handle on top of a metal piece that went into the scoop part of the spoon. They were smooth and sleek looking. They were not thin and wimpy looking. 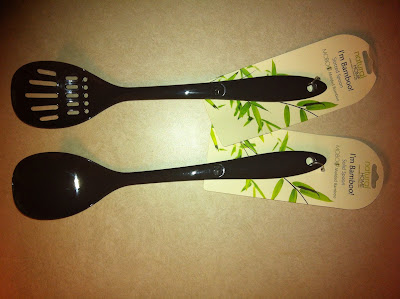 They looked like a hard plastic. That is why they caught my eye. I was looking for silicone to be honest with you. I wanted something that would withstand high heat. Remember I said my spoons were looking melted? I wanted to avoid a repeat. These looked like a hardened plastic. They were smooth and shiny. You cannot really tell from these pictures, but they are a greyish color.

Upon closer look, however, the thing that really caught my attention was that they were made out of bamboo. Bamboo is an interesting plant. It creates a super soft fiber to make soft cotton-like fabrics and yet it can create a super sturdy and hard item. It is amazingly versatile. These spoons got another look. They did not look like bamboo. They did not look like wood. They really did look like plastic. I had to touch them. I had to pick them up and feel them. I had to show Jennifer, who did not believe me that they were bamboo. Very interesting.

Naturally, I had to give them a try. I have to say that the price was right. They were under $3 a each. 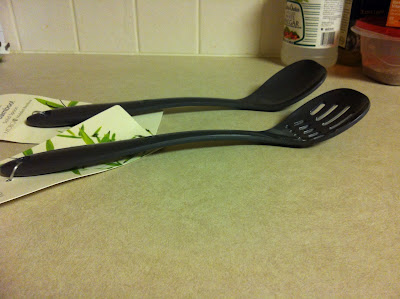 Here is a picture of them laying on the counter so you can see the curvature and their profile. They have a good length of handle so you can get over a good sized pot without burning your hands.

I used them for the first time tonight. I used the non-slotted spoon to make Chicken Tetrazzini. I have to say that I truly enjoyed using the Bamboo Spoon. It was a pleasant experience.

If you are looking for a lightweight spoon, this is not the product for you. They have some weight to them. They have a smooth surface, but it felt different in the pan. I am not sure how to explain it, but it just felt different. It did not feel like a plastic spoon, but it did not feel like a wooden spoon either. It did not sound like a metal spoon. It was nice to use. The weight was a nice thing in my opinion, but I understand that not everyone likes the heavier spoons.

While the scoop of the spoon is not very deep, it handled the task of scooping out the Tetrazzini mixture fairly well. I scooped out the soupy mixture into the pan and then used tongs to put the noodles into the pan. The spoon was able to hold a fair amount, but it is not a deep spoon so you have to have a steady hand or need to have a thicker sauce when using it for scooping. The line of cookware might have had a ladle, but I had a ladle at home already that was ample for my needs so I only bought what I needed to replace.

The spoon held up nicely to heat. No indication of wear in the heat. No melting. The handle did not get melted lines on it when sitting in the pot for extended periods of time.

There were other products in the line, but I only bought two spoons that I needed to replace. There were mixing bowls, pizza cutters, cutting boards, and other kitchen wares that I cannot recall.

All in all I give the spoon a good review. The first experience with it was good. I have not run it through the dishwasher yet, however. It is dishwasher safe. I also have not washed the non-stick pan I used it in. These two items may change my mind. For now, however, I will rate these spoons highly.