I tried to leave Salt Lake City, Utah. I tried to go home. I left for the airport.

It was snowing lightly when I left Aunt Maude and Uncle Cordell’s house. You can’t see it in the picture, but back behind the trees is supposed to be a line of mountains. Between the fog and snow, the mountains are no longer visible. 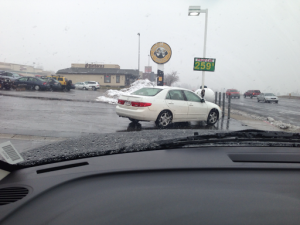 It was not a lot of fun to stand and pump gas in the snow. It was a little windy. Cold. Wet.
I drove through the rain and snow and even made it to the airport. The rental return was a very smooth process. I am grateful for Avis making that as painless as possible.
I already knew that my flight would be delayed upon arriving at the airport. Unfortunately, the delays were worse than when I had departed. By the time I had gotten my bag checked-in and made it through the security line, I had received notice that my flight would be delayed until just after 6:00PM for a flight that was originally scheduled to depart at 3:50PM.
Unfortunately, this would not be a good thing if the flight was delayed much later because I would barely make my connecting flight in Chicago, Illinois. I made it to the gate where my flight was to depart from so that I could find out more information. Of course there was no one there to provide additional information. The flight information board simply said that the flight was overbooked and they needed two people to volunteer to take a different flight. Oh and that the flight was delayed and the new estimated departure time just after 6:00pm.
I was more than willing to get on another flight for them. I was likely to miss my connecting flight anyway. I texted Ben and told him I was going to take the voucher if it was available and take a different flight home. I had already alerted him that my flight was delayed so this was no surprise.
Well by the time I found a person to help at a counter, the options were not so sweet. There were no vouchers to be had. They were basically rebooking anyone that was going to miss their connecting flight with no questions asked. Unfortunately, I was already on the last flight out to Chicago for the day and it was delayed 2 hours. My choice was to fly to Chicago and miss my connecting flight and they would put me on another flight in the morning. I asked if I’d even be able to get a hotel in Chicago near the airport. That changed his tune. He explained they wouldn’t have to provide hotel or transportation because it would be due to weather. What?!. Umm, okay no!. Red flags!
I told them I didn’t care where I flew to as long as I ended up in DFW. They looked and saw that there was a direct flight to DFW in the morning. It would put me on another airline, but it would be a direct flight home. It would fly out of Salt Lake City. He explained again they would not provide hotel or transportation because it is due to weather. I looked at him and asked him “is it direct to DFW?” He said it was and reread me times. I told him to do it that I didn’t need a hotel or transportation, I had arrangements.
I was not happy about it but I had a warm bed and family to take me back in. I was not going to get stuck in the Windy City without lodging and be forced to do overpriced take-out for room service. I was not spending the night in an airport. I was going someplace comfortable. I was tired. I had a migraine. I was starving. It was time to just cut my losses and call it a day… 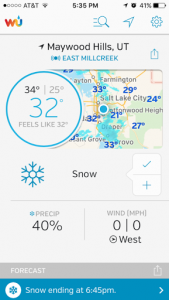 It was still snowing this afternoon when I left the airport. Not as bad as when I left for the airport. There are areas that are way worse than where we are now. It is not so bad here, actually. More fog than anything. Fortunately, it looks like the weather is improving overnight a little bit. I hope that the forecast stays that way. At least it will improve my odds of getting home tomorrow.
So I try again in the morning. This time I will fly on Delta instead of United. I will fly directly to DFW instead of to DFW via Chicago.