The latest updates
Since Strack’s closed a long while back, I have been on the search for a good chicken fried steak.

Living in Tomball, Texas I have access to a couple of really good places that are known for their chicken fried steak – Goodson’s Cafe and Mel’s Country Cafe. I have tried them both. I have to confess that while neither was horrible, neither was the best I have ever had either. I did favor one over the other, however.

Both eateries are a long time part of the Tomball “culture” just like chicken friend steak is as much of the southern food culture. There is not much that will get us to walk away from a good chicken friend steak. Since I was born in the deep south of Mississippi and raised in the great state of Texas, I truly appreciate a good southern meal – chicken fried steak, fried okra, and mashed potatoes.

That does not change the fact that I have been having a hard time finding a good chicken fried steak. I’ve been various places in the state of Texas and still have not found one that I am happy with. Mel’s was good. It was okay. Goodson’s was better in my opinion. My complaint with Goodson’s, however, is that it was often too salty. It might be an award winning chicken fried steak but it was always salty in my opinion.

So I kept looking… 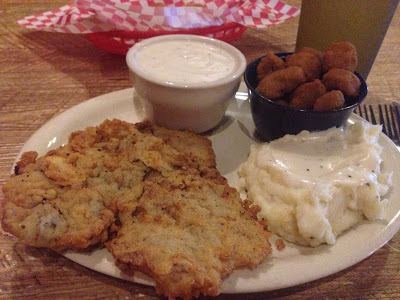 Well move over Goodson’s Cafe! This here is probably the absolute best, melt in your mouth, chicken fried steak I have had in a long time! I found this mouth watering delicacy down the street (highway) from where we are building our house. It is just down HWY 380 a few miles. It is not far.
This chicken fried steak was found at the Prairie House Restaurant on HWY 380 in Cross Roads, Texas.
The restaurant had a lovely country atmosphere. The people were friendly and cheery. When they brought this plate and put it in front of me, however, my face lit up. It looked and smelled so delightful. Most importantly, the waitress knew how the gravy was made and even went to verify that she was correct. She said that she would not put it on my plate if it contained anything that I could not consume. How awesome is that?
Just because she verified the gravy contents, it does not mean that it was 100% safe. It simply meant that it was safer. She may not have confirmed that the butter or milk/cream were kosher when she verified that ingredients. At least she confirmed that it did not contain pork fat or pork drippings. So it was safer. I still also had to contend with how they breaded the steak and fried it. There could be cross contaminations there. There would also be how they made the mashed potatoes. The same goes for how they breaded and fried the okra. Just how did they prepare their cornbread muffins and what did they cook them in? There were still a lot of unknowns.
I was hopeful, however, because they claim somewhere that I read online that if it comes from a box or a can, it does not come from their restaurant. This gives me fairly decent odds that most things are going to be safe as they would be made from scratch.
When I took my first bite of chicken fried steak, the words “oh wow!” slipped from my lips. I could not restrain them. They were free flowing. It was that good. I will confess that every bite was just as good as the first. Every bite of my experience was delightful and purely enjoyable.
The good news is that I did not feel sick. I did not feel overly unwell. Even a few hours later I was still feeling okay. Since I lack my gallbladder, I suffer the consequences of eating a highly fatty meal like what I ate almost immediately. It usually sends me straight to the bathroom. I experienced that. I did not experience the “I ate something I should not have and now I am going to be sick” feeling. For that I am truly grateful.
I am hopeful that my next encounter with the Prairie House Restaurant and their chicken friend steak will be pleasant. Who wants to join me?